An AFLDS Issue Brief for Citizens and Policymakers

If you’re looking for an interesting story - the monkeypox virus isn’t it.

The real story is about manipulating human beings using fear.

Read to see exactly how this is being done.

There are relatively few cases of monkeypox throughout the world as of the time of this brief. However, monkeypox is all over the mainstream media. Government officials have stated there is no cause for concern. Those of us who are awake realize we should be very concerned – not regarding another virus but for the next wave of tyranny in the quest for global control. The corrupt leaders of our country and many other countries are slowly and quietly obtaining global control while they distract the people with propaganda designed to keep the fear level high. They also stand to make more money than one can even fathom.

Wait, Another Simulated Pandemic Board Game?

Global leaders have been preparing for the next plandemic, and it looks exactly like the “prepping” they did for Covid-19. Remember Event 201? In case you are a latecomer to the scene of global pandemic fear porn, Event 201 was a pandemic tabletop exercise hosted by The John Hopkins Center for Health Security along with The World Economic Forum and The Bill and Melinda Gates Foundation. Event 201 took place on October 18, 2019, in New York City and was published on November 4, 2019.[1]  Event 201’s scenario involved a mock coronavirus outbreak in China![2] Less than two months after Event 201, we found ourselves living a real version of Bill Gates’ simulation!

In March 2021, the Munich Security Conference (remember, Germany is the number one donor to the WHO)[3] and the Nuclear Threat Initiative joined forces for another of these “tabletop exercises” involving a pandemic outbreak of an unusual strain of monkeypox virus. In this scenario, the “fictional pandemic” infected over three billion people and resulted in 270 million fatalities worldwide. The alleged goal of the monkeypox exercise was to point out flaws in the response and create solutions for better handling of future pandemics. Read the NTI paper, published November 23, 2021, here.

The NTI report credits the financial support from Open Philanthropy for making the exercise and report possible. Open Philanthropy is headed by Silicon Valley billionaires Cari Tuna and Dustin Moskovitz, who have been young proteges of Bill Gates for more than a decade.[4] Open Philanthropy was created from a merger between Tuna and Moskovitz’ organization, Good Ventures, and GiveWell[5] Bill and Melinda Gates Foundation is an active supporter of GiveWell.”[6]  Without exhaustively researching the funds for the monkeypox exercise, we can assume it is Gates-funded just like Event 201.

Bill Gates has been warning us for years about the next even more deadly pandemic. His pattern is to create or “fearmonger” regarding the problem, then ratchet up the fear, then profit from his creation and fear. Bill Gates is unequivocally brazen. However, there is evidence that more people are waking up to his pure evil. A top trending hashtag on Twitter in recent days is #BillGatesBioTerrorist.

What does this mean for us? These global organizations are joining together to give themselves the power to strip individual persons of their rights and autonomy. This well-planned design is happening on multiple levels. Government officials are moving silently and swiftly. In January 2022, the Biden Administration proposed amendments to The World Health Organization’s (WHO) International Health Regulations (IHR) which give the WHO Director-General the power to declare pandemics and institute mandates and lockdowns on sovereign nations like the once free, United States of America. 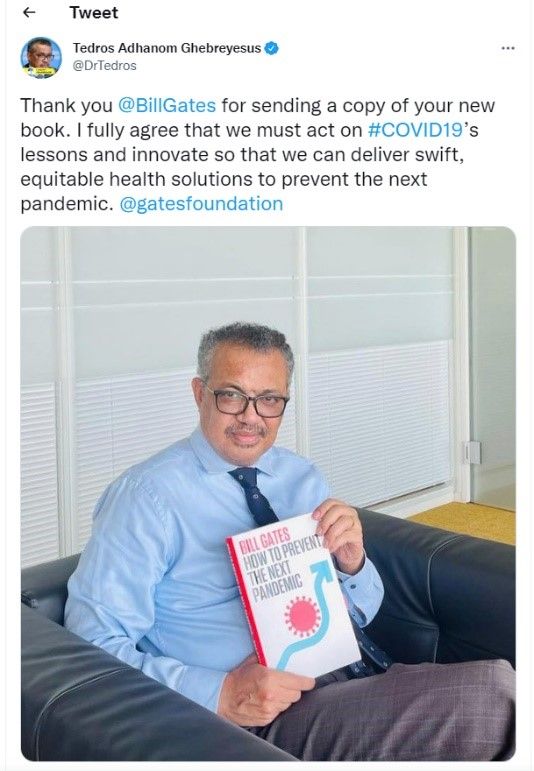 The current Director-General of the WHO is Tedros Adhanom Ghebreyesus. This corrupt man was put into this position by China. This corrupt man has a history of disparate treatment of citizens! In April 2022 in discussing the Ukraine-Russain conflict, he said that the world was too concerned about “white lives.” It is a terrifying thought to imagine this corrupt man could be given the power to tell We The People that we cannot leave our homes. If you have not already, I encourage you to read of full issue brief on the WHO proposed amendments here: Policy Division | America's Frontline Doctors (aflds.org) This amendment is currently being heard and voted upon (May 22-28, 2022). Again, if these amendments are adopted, the Director-General of the WHO will be authorized to declare a health emergency in the United States of America!

Like Covid, Monkeypox is a Nuisance, Not a Threat – at least not yet.

Monkeypox is not a new virus, it has been around for decades. If it were able to wipe out the human population, it would have already done so. We don’t need our government officials to restrict our rights to “protect” us from a virus that is not a threat to civilization but rather a nuisance. We do need our government to stop pushing shots which weaken our immune systems and leave people susceptible to disease because their bodies no longer work as God intended. We certainly do not need another vaccine for a virus that kills almost no one, except for those with sub-standard immune systems. And the scientific question of why a decades-old virus, formerly only seen rarely in Africa, is now suddenly being seen all over the world, in a temporal relationship to when shots were rolled out all over the world. Is there a connection between the shots (perhaps by immune suppression) and monkeypox?

The WHO defines a pandemic as “an epidemic occurring worldwide, or over a very wide area, crossing international boundaries and usually affecting a large number of people.”  That means the disease does not have to be deadly to be called a “pandemic,” only widespread.

We must acknowledge the true issues before us. This is not about a virus, this is not about your health, this is about creating a Marxist system with global world power and control. This is also about money. The NTI report, on page 21 (See below) proves that the participants in the monkeypox exercise were thinking about extraordinary financial gain and even noted the huge profits from the Covid
vaccine market.

As of Sunday, May 22, 2022, the country of Belgium is on lockdown for monkeypox for 21 days after four cases were reported in the country.[7][8]  Moderna is reportedly rushing into research and preclinical testing of a vaccine for monkeypox![9] This is exactly what we just lived through the past two years.

Something else is also looking very familiar. A hot topic in the Covid-19 saga has been Gain of Function studies at the Wuhan Institute of Virology, funded by NIH and Fauci. Guess what?  The Wuhan Institute of Virology has also assembled a monkeypox virus genome, to enable it to be identified through PCR tests. The report was published in February 2022, conveniently just before the latest worldwide “outbreak” of monkeypox.[10]

This is the New World Order. As long as the globalists and their puppet governments can keep the citizens of our planet focused on fear and pathogens, and censor health information and education about immune systems, they will continue to scare folks into compliance. This is true slavery as the system is also stealing your taxpayer money. Remember these quotes from Thomas Jefferson:

“Nothing can now be believed which is seen in a newspaper. Truth itself becomes suspicious by being put into that polluted vehicle."

"I, however, place economy among the first and most important republican virtues, and public debt as the greatest of the dangers to be feared."

How Do You Protect Yourself from Pathogens like Monkeypox?

Strong, healthy immune systems are designed to fight pathogens and they do it quite well all the time without acclaim. If the majority of people who get a pathogen don’t develop symptoms, then the difference between scary things and boring outcomes is not the pathogen; it’s the immune system. The only way to save humanity is to calm the fear that we need from the government to save us from pathogens and illness. The best steps we can take to support our immune systems are to refuse vaccines designed to destroy them, focus on healthy eating and exercise, and supplement when necessary. We are in a new era that requires more and more faith and more and more rejection of everything else. We have never before experienced this type of irrational fear in America. Turn off the news, turn off your fear, and find a trustworthy doctor wherever you can.

Please stay tuned to AFLDS. Soon you will be able to sign up for private, national telemedicine through GoldCare, a freedom platform established by AFLDS founder, physician, and attorney Dr. Simone Gold. Dr. Gold risked everything to bring you the truth and save lives from the very beginning of the Covid-19 pandemic. Dr. Gold and her teams at AFLDS and GoldCare continue to fight for your health and freedom.

Statement about nCoV and our pandemic exercise (centerforhealthsecurity.org)