Most people are happy when their grandchildren come to visit, but when it’s Delta’s grandchildren, the welcome isn’t quite so warm.

Eleven-year-old Eyal (not his real name) is currently hosting COVID-Delta’s grandson in Israel, according to Prof. Cyrille Cohen, head of the immunology laboratory in Bar Ilan University.

“AY4.2 is a descendant of AY4, a grandson of the Delta variant,” he told the Jerusalem Post, adding that AY4.2, who has yet to be given a more elegant name, is actually one of 56 “descendants” of the now-notorious Delta strain. In typical fashion, the various grandchildren are all competing for primacy; it’s not yet clear which of them will prevail, but the odds that it will be AY4.2 are apparently pretty good, as it is estimated to be between ten and fifteen percent more transmissible than its grandfather.

Eyal’s guest was discovered when he returned from a visit to Moldova and so he was already in quarantine when his coronavirus test came back positive. Health officials are hopeful that this means that his guest hasn’t made any new friends yet, but if previous experience with mutations is anything to go by, they have a nasty habit of cropping up just when you least expect them, and refusing to state where they came from.

Take the example of New Zealand, which locked down after just one confirmed case, only to find others appearing all over the place, many of them with no known origin. Or take the example of Mary (not her real name), a 52-year-old woman from Dublin, Ireland, who hosted multiple generations of her original guest throughout the course of her illness. Similar findings have been documented in additional studies.

Prof. Cohen doesn’t appear especially concerned at the new guest in his country. “This is not a catastrophe compared to the other variants we have known,” he said. After all, the vaccine is still preventing contagion in most cases, right? Actually, wrong. A recent report from the United Kingdom based on hundreds of thousands of COVID cases shows that transmission is actually enhanced among the vaccinated population, although it does seem at this stage that the chances of getting seriously ill or dying are still lower.

Speaking of the UK, another recent report from this week indicates that the AY4.2 variant is already running amok in Britain, accounting for close to ten percent of sequenced cases.

“UK reported its biggest one-day Covid case increase in 3 months just as the new delta variant AY.4 with the S:Y145H mutation in the spike reaches 8% of UK sequenced cases,” wrote former FDA commissioner Dr. Scott Gottlieb. “We need urgent research to figure out if this delta plus is more transmissible, has partial immune evasion?”

According to Prof. Cohen, the current spike in COVID cases in the UK is due not only to the new mutation but also to the unwillingness of Brits to wear face masks and the fact that the British government has lifted most coronavirus restrictions. He added to those reasons what he calls a “late” decision to start offering booster vaccine doses, given that the efficacy of the first two shots among the vaccinated population is likely waning by now.

As for keeping new mutations out of the country, he isn’t too hopeful; short of closing the borders (and crippling the tourism industry yet again), there’s really not much the authorities can do, he says.

The question Cohen doesn’t address is why certain parts of the world seem more prone to spawning mutations than others – but Drs. Tan, Lounnas, Azalbert, and Perronne do posit an answer to that question in a recent report published in the Archives of Microbiology and Immunology. Under the subheading, “Could SARS-CoV-2 vaccine trial have generated new variants more readily able to escape vaccine immunity?” they describe the process that is known as “immune escape mechanism” and present compelling evidence linking vaccination programs to the evolution of new strains of the coronavirus. 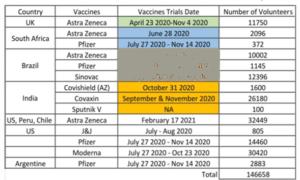 “Vaccines against the viruses … especially viruses with relatively high mutation rates such as influenza and coronaviruses … may favor the [appearance] of new mutants that can spread more easily since they do not compete with the strains decreased by the vaccine,” they write, noting that this can lead to the creation of “immunity voids readily available for the new variants to become dominant.”

Interestingly, they note that, “Remdesivir [a drug that was once hailed as a possible wonder-cure for COVID], which hampers the correct functioning of the viral polymerase, has been shown to cause accelerated SARS-CoV-2 viral evolution…”

According to the authors of this paper, “avoiding variants escape in SARS-coronaviruses vaccination is one of the two key issues in elaborating safe and valid vaccines.” In other words, the pharma companies developing COVID vaccines should have taken steps to make sure that their products do not promote the development of dangerous mutations. This did not happen: “By indicating that vaccines elaborated against SARS-CoV-2 would not prevent from developing the disease or being contagious, the vaccine manufacturers have clearly admitted that they could not entirely satisfactorily tackle [this] issue.”

Their conclusion is worrying indeed, and as noted, the data they have compiled is compelling. “We observe that variants of concern have emerged in the countries where large trials were conducted. The emergence occurred towards the end of the vaccine trial periods, or shortly after … Vaccines may have selected new variants in the pools of volunteers participating in trials across the world and contributed to prolong the Covid-19 pandemic.”