The report is meant to track various issues related to the several variants swirling around England. Included on page 18 is a summary of how many patients died based on vaccination status for the “Delta Variant”. The report looks at a time span of six months, from February until August, and distinguishes based on being over the age of fifty, and under the age of 50.

Out of the 265-thousand people infected under the age of fifty, 25,536 of them received two vaccination doses, of those 13 died (0.05%). Among the unvaccinated, there were 147,612 cases and 48 deaths (0.03%). Meaning that a person under the age of 50 who got infected with the Delta Variant would have a greater chance of survival if they remained unvaccinated. While the overall mortality at that age range is indeed low, as it always has been with COVID, the added risk of death in the vaccinated population is over 65% more than the unvaccinated (0.05% vs 0.03%). 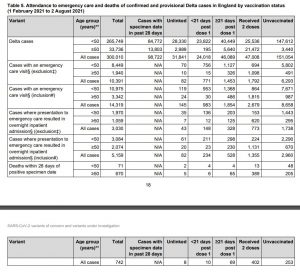 This data from Public Health England is particularly worrisome given the controversies surrounding the reports of adverse reactions including death. The reporting system for adverse reactions in England, known as the Yellow Card is similar to the Vaccine Adverse Event Reporting System (VARES) system in the U.S. The Yellow Card system has recorded over 1400 deaths by mid-July associated with the new COVID vaccinations.

Dr. Lawrie, director at Evidence-based Medicine Consultancy, released an extensive report that analyzed the data from the Medicines and Healthcare products Regulatory Agency’s (MHRA) Yellow Card system, acknowledging that “[The] Yellow Card reports do not necessarily imply causality… The MHRA itself, however, states that the purpose of the Yellow Card system is to be an early warning system that a medicine’s safety may need further investigation”

With that in mind, Dr. Lawrie is sounding that early warning. The report points out that based on the data from the government, “Fatalities reported post-COVID-19  vaccine to MHRA is shown to be 169 times more in number than the average for fatalities reported to MHRA over the last 10 years for all other vaccines.” The report continues by stating that “The rate of fatalities per dose administered in the UK was in the order of up to 28 times higher with the COVID-19 vaccines than with influenza vaccines.”

Despite this data on the ineffectiveness of the vaccine to prevent death in those under 50, and the dramatic increase of reported deaths associated with the COVID vaccination, governments around the world are continuing with the vaccination campaign and still claim the COVID vaccines are safe and effective.

See the report from Dr. Lawrie