“Eighty percent of our pilots are ex-military. We see the tyranny that’s happening. They’re coming for essential workers first (nurses, doctors, firefighters, police, military, teachers and transportation workers) and they’re coming for the rest of America next. We’re not doing it for us, we’re doing it for America. We swore to defend the constitution against all enemies.”

With over 2,000 flights cancelled in the last few days and no end in sight to the crisis, Southwest Airlines’ predicament may well be a harbinger of things to come.

According to Southwest itself, however, it’s just a matter of bad weather, and the barometer that falls can and will rise again.

“Southwest Airlines extends a tremendous apology to our customers and employees for the flight cancellations and delays which occurred over the weekend and on Monday,” the company said in a statement. “On Friday evening, the airline ended the day with numerous cancellations, primarily created by weather and other external constraints, which left aircraft and crews out of pre-planned positions to operate our schedule on Saturday. Unfortunately, the out-of-place aircraft and continued strain on our crew resources created additional cancelations across our point-to-point network that cascaded throughout the weekend and into Monday.

“Southwest teams have been working diligently to restore stability to the network, and we are experiencing less disruptions on Monday. We hope to restore our full schedule as soon as possible.”

The airline also stressed that “the operational challenges were not a result of Southwest employee demonstrations,” and tried to shift some of the blame to the Federal Aviation Administration (FAA), which “imposed air traffic management program … due to weather, [which] resulted in a large number of cancellations.”

However, the FAA rebuffed the allegations, issuing its own statement that stressed that, “No FAA air traffic staffing shortages have been reported since Friday.” What, then, was the problem? “Some airlines continue to experience scheduling challenges due to aircraft and crews being out of place,” the FAA’s statement continued. “Please contact the airlines for details about current flight schedules.”

But the spat between Southwest and the FAA was, by that point, already a sideshow once rumors started to swirl regarding what was really going on behind the scenes. Although Southwest freely admits it is seeking to hire thousands of new workers to combat a staffing shortage, it has refused to comment on allegations that it is about to lose hundreds if not thousands of staff due to the federal vaccine mandate that the company is determined to enforce.

Casey Murray, president of the Southwest Airlines Pilots Association (SWAPA) blamed the flight woes on staffing and a “poorly run operation.” He claimed that the rate of pilots calling in sick has not spiked this weekend, and stressed in a statement that, “We can say with confidence that our pilots are not participating in any official or unofficial job actions.”

Official or not, there is plenty of anecdotal evidence that “unofficial job actions,” if one wishes to name them so, are in fact what is going on at Southwest. Facing impending termination due to refusal to be vaccinated against COVID, thousands of staff are using up their vacation days before they lose them.

“There is no weather,” scoffs one inside source on Facebook, who explained that, “Off-duty crew are not picking up trips to cover” for all those who are using up their leave. 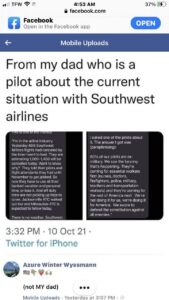 He then adds: I asked one of the pilots about it. The answer I got was (paraphrasing):

Eighty percent of our pilots are ex-military. We see the tyranny that’s happening. They’re coming for essential workers first (nurses, doctors, firefighters, police, military, teachers and transportation workers) and they’re coming for the rest of America next. We’re not doing it for us, we’re doing it for America. We swore to defend the constitution against all enemies.