“We became curious about the real Children’s Crusade, so O’Hare looked it up in a book he had, Extraordinary Popular Delusions and the Madness of Crowds, by Charles Mackay, LL.D. It was first published in London in 1841.

“Mackay had a low opinion of all Crusades. The Children’s Crusade struck him as only slightly more sordid than the ten Crusades for grown-ups. O’Hare read this handsome passage out loud:

“History in her solemn page informs us that the Crusaders were but ignorant and savage men, that their motives were those of bigotry unmitigated, and that their pathway was one of blood and wars.

“Romance, on the other hand, dilates upon their piety and heroism, and portrays, in her most glowing and impassioned hues, their virtue and magnanimity, the imperishable honor they acquired for themselves, and the great services they rendered to Christianity.

“And then O’Hare read this: Now what was the grand result of all these struggles? Europe expended millions of her treasures, and the blood of two million of her people; and a handful of quarrelsome knights retained possession of Palestine for about one hundred years!

“Mackay told us that the Children’s Crusade started in 1213, when two monks got the idea of raising armies of children in Germany and France, and selling them in North Africa as slaves. Thirty thousand children volunteered, thinking they were going to Palestine. They were no doubt idle and deserted children who generally swarm in great cities, nurtured on vice and daring, said Mackay, and ready for anything.

“Pope Innocent the Third thought they were going to Palestine, too, and he was thrilled. ‘These children are awake while we are asleep!’ he said.

“Most of the children were shipped out of Marseilles, and about half of them drowned in shipwrecks. The other half got to North Africa where they were sold.”

The Israeli campaign to vaccinate children between the ages of 5 and 12 begins today, with the Prime Minister claiming the next morbidity wave will be a “Children’s Wave”.

Mainstream newscasts open with intimidating data, such as: 50% of confirmed cases are in children 0–11. A quick look at the data, however, is sufficient to demonstrate that last week the number of “confirmed cases” in children 0-11 was an average of 220 per day, while just two months ago, in mid-September, the numbers stood at a record high of 3,200 confirmed cases daily. From 3,200 to 220, a drop of 95% morbidity – in children who were not even vaccinated.

So what kind of Children’s Crusade are we talking about?

The data in the graph below are based on an Excel analysis of the young population from the Health Ministry database, prepared by Real-Time News.

“There are 2.1 million children between the ages of 0 and 11 living in Israel. Is it reasonable to put the entire nation into high alert over a fifth wave because of 220 cases a day? Alternatively, could this be a campaign orchestrated in preparation for the sale to the public of vaccines for children?” asked Real-Time News.

The percentage of positive results represents the danger that an individual will turn into a confirmed case; that is, receive a positive coronavirus test result. This risk depends on a variety of parameters, from the spread of the virus in the population to the various tests used and testing policy. For example, If more people in red communities are tested, then the percentage of positive results for the entire population will be higher than if mostly people in green communities were tested.

“We see from the graph that at the start of every wave they cut back a bit on testing children,” wrote Real-Time News, “causing their percentage of positive tests to be low relative to other age groups. Soon, however, this stabilizes, and the children carry the heavier burden of positive test results.

“There is nothing new at the end of the fourth wave – the patterns of morbidity are very similar to those observed at the end of the second wave last summer, for example, during a period when there were no vaccines. In both cases, testing going into the wave focused on the adult population and their positive rates were a bit higher, but within two weeks the positive rate amongst children again rose above that of the rest of the population, even though it was the holiday season and that time last year was a period of lockdown, when children were not in school or daycare.”

How can we then explain the high positivity rate in children, compared to adults, and the claim that 50% of the confirmed cases were in children? The answer, apparently, lies in how the testing operation was deployed.

“Take, for example, the intensive testing campaigns and high number of tests in the Haredi and Arab sectors. In these communities, the population is younger, and the positive rate is always higher. There is currently a relatively high amount of testing being done in the Arab sector, where 30% of the population are children. As a result, the positive rate in children is artificially raised, while they do not report to us that a large portion of the tests and ‘cases’ are amongst Arab and Haredi children.”

The paper continued: “Another way to play with coronavirus testing so it can be claimed that 50% of the cases are in children, is to use data from Ben Gurion Airport. In the month of October, about 400,000 people entered Israel through Ben Gurion Airport, the vast majority of whom were adults, and most were vaccinated. The positive rate at Ben Gurion airport is very low, which is not surprising as we are talking about people who were tested outside of Israel before they got on their flight, so the chances that they will test positive is slim. All told, we are talking about a third of all the tests done on adults. Thus, apparently, many adults are tested, but the way they are tested is very different.

“Playing with the data may succeed in creating headlines – albeit distorted – according to which children comprise half of all cases. Even after all these manipulations, however, it is still not possible to hide the fact that when we look at the children alone, the positive rate in the 0–19 age group stands at only 1.1%!

There are about 24,000 tests administered to children on average every day, with about 275 “cases” detected. Compared to figures from the middle of September – a daily average of 70,000(!) tests and about 4,300 daily “cases” – it is unclear what kind of Children’s Wave we are talking about and what is exceptional here.

Two months ago, during the holidays, about half of all children were tested. During the four weeks between the August 22nd and September 18th, 1,250,000 tests were performed with 85,000 “cases confirmed”. There are 2.1 million children under the age of eleven in Israel.

Compare this also to July, when they were doing about half the number of tests – 340,000 – and found about 5,000 “cases”. Morbidity in July was very similar to today, but they were testing less. 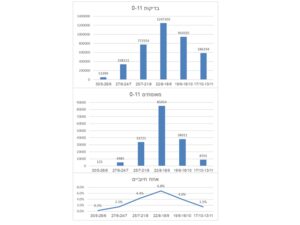 Is what we are seeing today, then, really a “Children’s Wave”?

“The answer is that this is simply sleight of hand,” concluded Real-Time News. “The absolute morbidity rates are very low, despite the very high rate of testing, and they are not essentially different from the rates four months ago, or from those presented by the Health Ministry a year ago, at the end of the second wave. In order to confuse us, the way tests are deployed is strongly biased against children, and they use percentages to scare the public.

“Bill Gates once recommended the famous book, How to Lie With Statistics. It appears that our policy makers heeded his advice and read the book. The data themselves, of course, are not the problem. The problem is how they are interpreted and their cynical use by the media to scare the public. As usual.”