As reported in The Expose and The Daily Sceptic teenage deaths have risen substantially since the start of the vaccination. “Between weeks 23 and 37 in 2021, there have been 252 deaths among 15-19 year-olds in England and Wales. This compares to 162 in the same period in 2020, an increase of 90 or 56%.” According to the analysis, “The marked divergence around week 23 broadly corresponds to when the vaccination programme among the age group was being ramped up.” 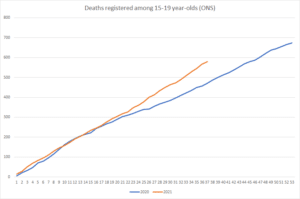 A conclusion is that the increase in mortality is a result of the vaccine is premature, but the matter needs to be investigated to determine if there is a link, particularly when the Chief Medical Officers just recommended vaccination for children 12-16. This, despite the fact the Joint Committee on Vaccination and Immunisation (JCVI), the body responsible for making scientifically-based recommendations for the U.K. did not support vaccinating 12- 16 year old, unless they were at high risk due to a preexisting condition.

Adding to concerns, Denmark, Sweden, and Finland all announced last week a suspension in vaccinating those under 30 years old with the Moderna vaccine citing an increase of myocarditis and pericarditis among youths and young adults that were vaccinated. “The connection is especially clear when it comes to Moderna’s vaccine Spikevax, especially after the second dose,” the Swedish health agency said to Reuters, adding the risk of being affected was very small.

Governments are becoming more concerned with the instances of myocarditis and pericarditis, even though very few of those instances led to death. It is estimated that between a quarter to a half of people with myocarditis die within 3-10 years.

The UK’s system of reporting adverse effects from vaccinations has seen a significant increase from the COVID vaccines. According to a report that analyzed the data from the Yellow Card system (the VARES equivalent in the UK), “Fatalities reported post-COVID vaccine to MHRA are shown to be 169 times more in number than the average for fatalities reported to MHRA over the last 10 years for all other vaccines.” The report continued, stating that “The rate of fatalities per dose administered in the UK was in the order of up to 28 times higher with the COVID vaccines than with influenza vaccines.”

As with the increase in teenage mortality and the incidence of myocarditis, the reporting of death and serious bodily injury associated with the COVID vaccine needs to be thoroughly investigated. With the safety of the COVID vaccines being seriously called into question, many are calling for a stop to vaccine mandates, passports, and coercion so that individuals can choose what sets of risks they are more comfortable with.