Analysis and comparison of the review document submitted by Pfizer to the US Food and Drug Administration, on the basis of which the FDA gave the green light to expand the emergency permit for vaccination also for children aged 12-15 (1), as opposed to the study protocol in children (2, 3), reveal concerning findings,  including violations of the protocol established by Pfizer itself, and no less serious, designing the trial protocol in a way that will allow the company to present as positive findings as possible in terms of vaccine safety in children.

Violation of protocol conditions – How did children with a psychiatric diagnosis get to be included in the study?

According to the review document submitted by Pfizer to the FDA, four of the 1,131 children in the study arm who received Pfizer-BioNTech COVID-19 Vaccine suffered from serious adverse events (“SAEs”) – that is, events in which at least one criterion was met: caused death, is life-threatening, requires hospitalization or prolongation of existing hospitalization, results in persistent disability/incapacity, or congenital anomaly/birth defect. 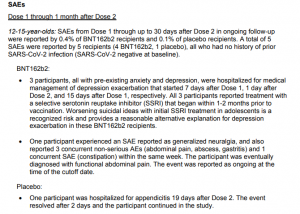 The consequence of this finding is extremely worrying, as it means that one in every 350-400 children who are vaccinated might suffer from severe depression and need hospitalization.

To reassure us, Pfizer notes in its review document that in fact, all three children had a pre-existing diagnosis of anxiety and depression. Moreover, they explain – all three actually reported a selective serotonin reuptake inhibitor (SSRI) that began within 1-2 months prior to vaccination.

“Worsening suicidal ideas with initial SSRI treatment in adolescents”, they explain, “is a recognized risk and provides a reasonable alternative explanation for depression exacerbation in these BNT162b2 recipients”. So here you go – why blame the vaccine, when there is a perfectly reasonable and logical alternative explanation for the exacerbation of their depression?

What is the problem with this explanation?

This is therefore a blatant violation of the study protocol established by the company itself and approved by the FDA. The implication of such a violation is severe: if Pfizer were so negligent that they included subjects with a psychiatric background in the experiment – contrary to the protocol they themselves established – it means that the subjects’ well-being is not their main concern. As Pfizer itself notes in the protocol: such a background may increase the risk of study participation. And if they do not adhere to ethics in recruiting subjects, who can assure us that they adhere to ethics in other sections of the study – for example, analysis of results?

In at least two criteria, the company appears to have manipulatively designed the protocol in a way that would allow it to present as positive findings as possible in terms of vaccine safety in children:

In the Pediatric Study Protocol (see table on page 12), Pfizer undertook that the duration of follow-up for serious adverse events (SAEs) would be “from Dose 1 to 6 months after the second dose”. 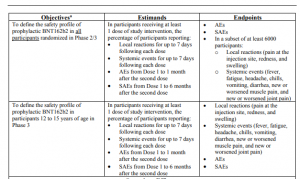 A six-month follow-up period is considered to be very short compared to the usual follow-up time in Phase 3 studies for vaccines. According to the FDA, Phase 3 in vaccine studies should last between one and four years (4).

Yet it turns out from Pfizer’s review document that the company did not complete even this relatively short follow-up period, and in fact was content with only 30 days of follow-up of the severe adverse events. This fact emerges from the chapter dealing with the date of analysis (page 30, under the heading of the SAEs chapter): “12-15-year-olds: SAEs from Dose 1 through up to 30 days after Dose 2 in ongoing follow-up were reported by 0.4% of BNT162b2 recipients and 0.1% of placebo recipients“.

How has this been made possible?

On page 114 of the study protocol – in the chapter dealing with the timing at which the statistical analyzes will be performed, Pfizer set a number of time points for the purpose of performing these analyzes. While the maximum time period for monitoring severe adverse events in the general study population is six months (the seventh section), the fifth section set an additional cut-off point, of only 30 days after the second dose for the purpose of comparing data between two age groups – one of ages 12-15 and one  of ages 16-25. 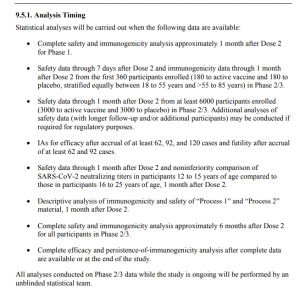 In other words, the protocol appears to be designed in such a way that the review submitted to the FDA will only include the serious adverse events that appeared during the first month after vaccination.

The concerning implication of this practice is that serious adverse events may not appear in the report on the basis of which the FDA issues the emergency authorization for children, so continued follow-up, even if published a few months or years after the temporary authorization was issued, will not help children who will be harmed or die following the FDA’s green light.

Designing the protocol so that diagnoses of serious adverse events given in hospitals unrelated to the study site can be ignored.

Within the terms of the Outcome Measures in the study protocol, as it is presented in Clinicaltrials.gov Pfizer determined that the research team selected by Pfizer will be the ones defining the adverse events as such: “As elicited by investigative site staff”.

This way, the company has in effect given researchers selected by them the power to define for themselves what the diagnosis will be, regardless of the diagnosis given at the hospital/ward which is not defined as the research site.

Why is this problematic?

Because such a determination means that if a particular participant suffers from serious adverse events and has been treated, for example, outside the hospital or ward that functions as the research site, then in fact, the diagnosis made by the attending physicians at the hospital/ward in which the participant is treated is irrelevant.

This way, Pfizer has actually allowed its team to define what the diagnosis will be, rather than letting the diagnosis given by the attending physicians confuse them.

Beyond the severe criticism towards Pfizer, the analysis and comparison raise serious questions for the FDA itself:

Yaffa Shir-Raz, PhD, is a risk-communication researcher and a teaching fellow in the University of Haifa and the Interdisciplinary Center Herzliya in Israel.