“I have no one else to turn to when my own company won’t be honest with me.”

The company is Pfizer.

“I was told to trust Project Veritas and to go with you guys by lawmakers, by lawyers.”

Speaking is Melissa Strickler, manufacturing quality auditor at the German pharmaceutical company that brought mRNA COVID vaccines to the world.

Project Veritas, established in 2010, “investigates and exposes corruption, dishonesty, self-dealing, waste, fraud, and other misconduct in both public and private institutions to achieve a more ethical and transparent society,” according to its founder, James O’Keefe.

On October 6, 2021, Project Veritas published yet another expose from a BigPharma insider, complete with documentation. Melissa Strickler describes her loss of trust in the company she worked for, the deceitful practices she personally observed, and her decision to blow the whistle on them, regardless of the consequences.

While other whistleblowers have focused on the risks associated with the vaccine, Strickler was particularly perturbed by the strong evidence she saw indicating that aborted fetal material was used to develop the vaccine and, possibly, in the vaccine itself. 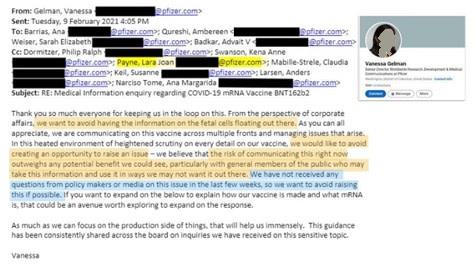 “From the perspective of corporate affairs,” Gelman wrote in one email, “we want to avoid having the information on fetal cells floating out there … The risk of communicating this right now outweighs any potential benefit we could see, particularly with general members of the public who may take this information and use it in ways we may not want out there. We have not received any questions from policy makers or media on this issue in the last few weeks, so we want to avoid raising this if possible.” 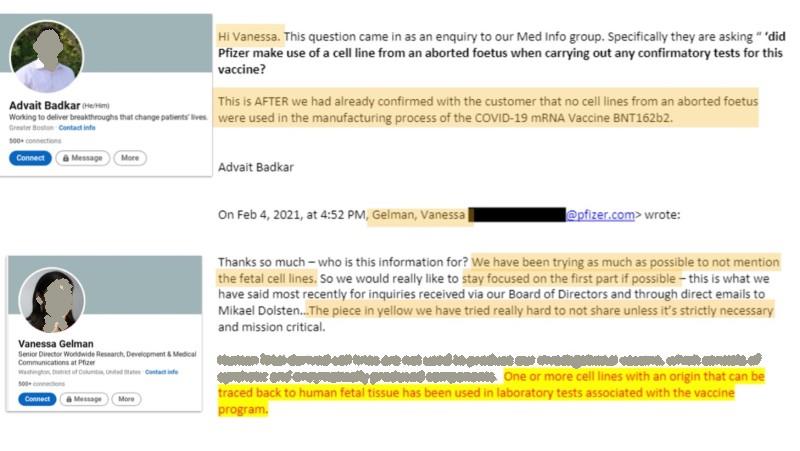 In another email exchange between Advait Badkar, senior director of the Novel Delivery Technologies group within Pfizer’s Biotherapeutics Pharmaceutical Sciences organization, Gelman can be seen admitting to Badkar that, “One or more cell lines with an origin that can be traced back to human fetal tissue has been used in laboratory tests associated with the vaccine program.”

She warned him that, “We have been trying as much as possible to not mention the fetal cell lines.”

“HEK293T cells, used for the IVE assay, are ultimately derived from an aborted fetus,” Dormitzer wrote. “Pfizer’s official statement couches the answer well and is what should be provided in response to an outside inquiry.”