There has been a growing trend of attacking, vilifying, and censoring any doctor who doesn’t conform to the establishment medicine perspective on COVID-19. Many highly qualified physicians, virologists, vaccinologists, epidemiologists, and others have been maligned in this way.

One doctor under attack is Simone Gold, the medical doctor and lawyer who founded America’s Frontline Doctors (AFLDS).

Suzanne B. Robotti, the founder and president of the website MedShadow, took it upon herself to attack Gold (and America’s Frontline Doctors) by making spurious and misleading claims about her activities and statements. MedShadow’s attempt to discredit her and her organization harms their readership more than they do Dr. Gold and AFLDS.

To help the public understand the deceitful tactics used by MedShadow (and others) to obfuscate and hide the truth from their audience, AFLDS analyzes and responds to her allegations. The following is Part 1 of  AFLDS’s response:

Edited to include the following 2 paragraphs about the source video upon which their claims against Dr. Gold are based:

While garnering headlines, the Frontline Doctors produced its breakout star, emergency room physician and attorney Simone Gold, MD. Because a good friend asked my opinion of Gold’s recent video, I spent an hour watching her YouTube lecture. Although the video has been taken down from YouTube for “violating our terms of service,” I was easily able to find the re-post by searching “Simone Gold.” The same video, now titled, “Video 1,” is the fourth video down from the top. If the link in this paragraph doesn’t yield you the right YouTube video, keep looking.

YouTube often removes videos that are counter to the “acceptable narrative”, yet Robotti has shared with her readers neither the original title of the video, The Truth About the Covid-19 Vaccine, nor the actual link which she subsequently found (explaining to readers that they can now find it as Video 1, the fourth video down from the top (the top of where?) or to keep looking, is pure obfuscation). It might be that she didn’t want anyone to learn how she not only misconstrued facts but also was dishonest about some of what Dr. Gold had said. For instance, Gold referred to a retracted Lancet study about hydroxychloroquine (HCQ) as a therapy for Covid-19 patients, to give an example of the lies that were being promulgated about HCQ and the dishonesty of the media; the study had been widely promoted as proving that HCQ is not effective and even dangerous, for Covid-19 patients, yet the retraction was hardly mentioned by the media. Robotti, however, stated that Gold’s intent was to show that HCQ is safe.

“Her arguments sounded ‘good,’ except that she and the Frontline Doctors leave out a lot of critical information. Everything Gold said was technically ‘true’, but it was woefully incomplete. Really, she was telling lies of omission by cherry-picking information, using old data when newer, better data is available, and raising questions to cast doubt, when those questions have already been answered sufficiently.”

Actually, it is Robotti that leaves out a lot of critical information and it cannot be said that everything she says is “technically” true, either. She uses old data when there is new, her claims are without foundation and, consequently, not only damage Dr. Gold, but also the public, who are misled, to their detriment.

Claim 1. The Safety of HCQ

“There are a LOT of other low-cost well-known drugs and therapies that are much safer than hydroxychloroquine (HCQ) and demonstrably lower the death rate for COVID-19.”

Let’s take a look at all the many drugs she says work better than hydroxychloroquine. The link she offers opens up to another MedShadow article, Off-Label: Can Drugs Developed For Other Diseases Treat COVID-19?, written by Sarah Ludwig Rausch. Rausch is a freelance editor and copywriter. She last updated her article March 15, 2021.

A Google search found that Gilead Sciences, the company that makes Remdesivir, said that it was better than “standard care” but the difference was of uncertain clinical importance. A five-day course of treatment with the drug can cost up to $3,120. Remdesivir has not been shown to lower the death rate, it is not safer than HCQ, and it is not low cost.

The other two antivirals, Ritonavir and Lopinavir are used in a combination drug called Kaletra. Kaletra has not been shown to be effective against Covid-19. It also comes with serious health risks and risks of serious drug interactions.

Does hydroxychloroquine have associated serious adverse effects that would make it unsafe to use as is suggested in the original article and this one by Rausch?

Let’s look at a few of the events they mentioned.

However, the principal findings of a study of rheumatoid arthritis (RA) patients who use HCQ regularly, first published July 2020, as a pre-print (before it was peer-reviewed) and then published Dec 25, 2020, online in the journal Rheumatology (so Rausch should have had that information) after it was accepted, shows that:

“…  there is no association with the use of HCQ with acute psychosis, depression, or suicide as compared with SSZ [another drug used for RA]. These results are seen both in the short-term and long-term risk analyses. … This study uses data from three countries, with a variety of healthcare systems and modes of routine healthcare data included, enabling the study to produce more generalizable results.”

The researchers speculate that:

“… The increase in reporting of acute psychiatric disease during the COVID-19 pandemic may be multifactorial, with an increase in external stressors such as social isolation, financial uncertainty and increased misuse of drugs and alcohol [47–49…”

Rausch also cherry-picked a single article showing that hydroxychloroquine did not prevent post-exposure COVID-19. What she neglected to mention were some of the many other studies confirming the efficacy of HCQ for Covid-19. Hydroxychloroquine has also been shown to save lives here, here, and here. It is also low-cost.

Similarly, with Ivermectin, Rausch refers to one study where the NIH doesn’t recommend for or against. The serious adverse events she lists are quite mild. However, they neglected some of the many other studies that confirm that Ivermectin works against Covid-19. It has also been shown to save lives. Ivermectin is also an effective life-saving and low-cost therapy.

As is apparent, Robotti could not substantiate her claim that there are a lot of other low-cost, life-saving therapies for Covid-19. Ivermectin is the only other one listed that fills the criteria and Dr. Gold began recommending Ivermectin and other treatments, once their benefits were known; hydroxychloroquine had just been the first.

The graph below shows how the rates of death shot up for both Switzerland and France when HCQ was temporarily banned following this Lancet study and then went down again once its use was reinstated. 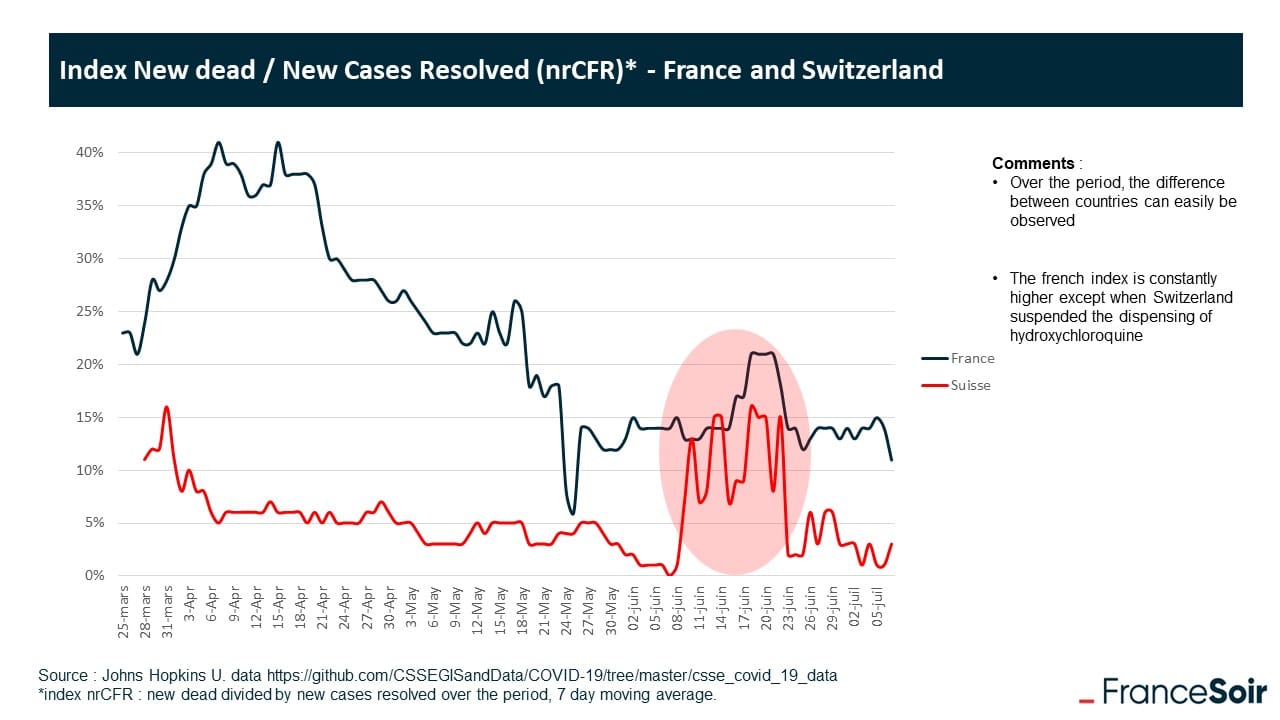 What about MedShadow’s other claims regarding HCQ? Can they stand up to scrutiny?

“…Gold claims that HCQ is given freely to US troops and travelers, which is out of date. HCQ is now only used in acute cases for one type of malaria, and, in general, is no longer used to prevent or treat malaria.”

Is this true? Readers wouldn’t be able to tell from the link Robotti provides since it opens to a page showing some side effects of HCQ, but nothing to back up their contentions.

Here are the facts:

U.S. troops and travelers still use HCQ. In May 2020, “VA Secretary Robert Wilkie said … that the Defense Department and the VA have been using the drug hydroxychloroquine for decades, and on any given day, the VA uses 42,000 doses of the drug.”

Chloroquine and hydroxychloroquine are still used in countries where malaria is endemic, despite drug resistance and WHO recommendations. The CDC still recommends it for travelers to parts of Central America and the Caribbean.

How does HCQ dosing compare with dosing for malaria?

“To “prove” the drug is safe, Gold notes that those with rheumatoid arthritis (RA) and similar diseases have, when needed, taken it for long periods. That’s true. However, HCQ is not the first choice of drug for RA due to its side effects. Safer drugs like methotrexate or similar DMARD (disease-modifying antirheumatic drugs) are recommended first. When first-line drugs are ineffective for RA patients, the risk of HCQ’s side effects in those cases outweighs the benefits.”

A look at the page Robotti linked to, shows that the first line drugs for RA are from a class of drugs known as disease-modifying antirheumatic drugs (DMARD). HCQ is from a different class of drugs. The DMARD of choice is methotrexate, which comes with a long list of adverse effects; more common ones include a variety of bleeding problems, fast heartbeat, and trouble breathing. A report on methotrexate adverse effects states that it is used for its potent efficacy and tolerability, yet it comes with some serious potential side effects such as “most common gastrointestinal toxicity effects to less frequent malignant diseases”.  Methotrexate can also be toxic to the lungs and cause pulmonary fibrosis, a serious lung condition. Methotrexate is not safer than HCQ, the adverse effects of which can be seen at the link (which MedShadow provided) above.

Claim 2. Yes, a study on HCQ was withdrawn

“To justify that HCQ is safe, Gold recounted the findings of a study in The Lancet, the prestigious British medical journal, which was later withdrawn. The study revealed that it is dangerous to treat COVID-19 with hydroxychloroquine. Just because the study was retracted doesn’t necessarily mean its findings are incorrect; it means that the data to support that conclusion were flawed.”

The suggestion that even if the data was flawed it doesn’t mean that the conclusions are incorrect is preposterous. If the data is flawed then we have no way of knowing if the conclusion is correct or not; it could be totally opposite.

The retraction of the study by the Lancet was quite an unusual occurrence; never before had a journal of that caliber retracted a paper so soon after it had been published.

After the study came out on May 22, 2020, researchers and medical professionals from around the world raised serious concerns about the study, including integrity of the data, questions about the statistical modelling, lack of adherence to standard practices in the machine learning and statistics community, no ethics review, no mention of the countries or hospitals that contributed to the data source, and no acknowledgments to their contributions, among other problems.

Dr. James Toderos researched Surgisphere, the company responsible for the study’s data, and found that the company itself did not have a history or web presence that would be reflective of an organization with a multinational database, such as the one that would have been required for the Lancet study. In fact, besides the founder, all of the other four employees were hired within the previous 2-3 months and none of them had a medical background. Besides the Lancet publication, Surgisphere had only one other peer-reviewed publication, published May 1, 2020, by the New England Journal of Medicine. It, too, was retracted.

Toderos’s conclusion: the study was made up out of thin air.

This problematic study, based on seemingly fabricated data, was the reason that hydroxychloroquine became banned for use in many countries as a COVID therapy. While the study was widely publicized, the retraction wasn’t. Dr. Gold was certainly correct to let people know that it was withdrawn.

Rather than lying to their readership and hoping they don’t click on any of the links, MedShadow should have told them the truth, that hydroxychloroquine and ivermectin are both safe and effective low-cost therapies for COVID-19. They are both on the WHO List of Essential Medications and have a history of safe use. Hydroxychloroquine is the  129th most prescribed drug in 2021 with 5,406,190 prescriptions filled in 2018.

Learn more about HCQ here and about doctors’ protocols for hydroxychloroquine use here.

Learn more about Ivermectin here and about doctors’ protocols for ivermectin use here.